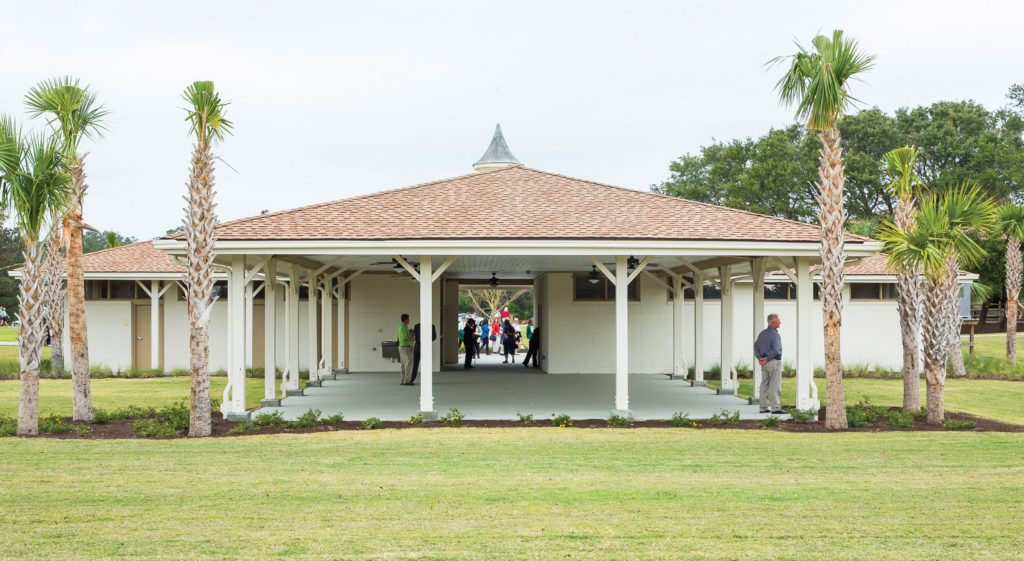 In the 1960s, it was a beach playground for black Americans. Then it became a place for children to learn about the teeming life on Georgia’s barrier islands. Now this well-trodden plot of land gets another makeover, as a state-of-the-art youth and learning center truly worthy of the name “camp.”

On Jekyll, buildings tend to reinvent themselves. Because the state-owned island must, by law, limit development to one-third of its elevated land, you have facilities like the Georgia Sea Turtle Center, housed in a retrofitted power plant from 1903. Or the Holiday Inn Resort, built in the bones of the 1950s Wanderer, the first hotel ever erected on Jekyll. But perhaps no site exemplifies this blending of histories better than the old Dolphin Club and Motor Hotel, a former resort for black Americans in the segregation era.

Most Georgians today know the complex as the old 4-H Center. Since 1983, some 300,000 kids have spent time at the center, getting a hands-on immersion in ecology at summer camps and on school field trips. That’s a lot of kids, and a lot of wear and tear. When the Jekyll Island Authority gave Governor Nathan Deal a tour of the center in 2013, its facilities were—in the words of center director Richard Chewning—“tired.” Deal swung into action, persuading the General Assembly to appropriate $17 million for the Jekyll Island Authority to erect an almost entirely new campus—complete with modern sleeping quarters, a learning center with laboratories, and an auditorium—and refurbish the historic pavilion. Camp Jekyll, as it’s called, will carry on the mission of environmental education and youth development while recognizing the property’s Jim Crow origins.

The site occupies a prominent place in Georgia history. The state took ownership of Jekyll Island in 1947, and three years later, a group of black leaders from Brunswick asked the state-run Jekyll Island Authority to open up a portion of the island for people of color. In 1955, the “Negro Beach House” pavilion debuted on the south end of Jekyll, one of the few oceanfront gathering places for blacks in the Deep South. Four years later, the Dolphin Club and Motor Hotel opened on an adjacent piece of property, and with it an auditorium that would draw music legends such as Otis Redding, B.B. King, Percy Sledge, and Wilson Pickett to this sliver of Georgia’s coast.

Desegregation for Jekyll Island came in 1964, and the Dolphin Club shuttered two years later. In 1983, the University of Georgia Cooperative Extension Service began using the facilities for summer youth camps, then added a year-round 4-H program a few years later. Grade-school students got their feet muddy exploring the marsh, seined for aquatic life in the surf, built sand sculptures, and ate s’mores around the fire.

The 4-H Center closed at the end of 2014 as the Jekyll Island Authority began construction on Camp Jekyll. The only original building left standing was the pavilion, which serves as the heart of the campus; a total renovation actually took the structure backward in time, with a concessions and gift shop that now looks as it did in 1955. The Jekyll Island Authority erected seven panels across the grounds to display photographs of the original buildings and the people who fought to integrate the island.

The showcase of the new 256-bed complex is the Sandra Deal Learning Center, constructed, in the Jekyll way, in the footprint of the original auditorium. (The Jekyll Island Authority Board of Directors honored Sandra Deal, wife of Governor Deal and a retired longtime schoolteacher and advocate for childhood literacy, by naming the center after her.) The center includes not only a 300-seat auditorium but aquatic and reptile labs and classrooms. In these rooms, kids will be able to study live sea turtles, dissect sharks and fish, and learn about other amphibians and reptiles native to the island. But it’s not all academic. The Jekyll Island Authority installed new basketball and volleyball courts, and there’s an eleven-acre soccer complex next door. Groups like soccer camps or band camps can rent out the facilities. The only requirement? The clientele must be kids.

Interest in the new Camp Jekyll surged as the February 2017 grand opening approached. When the camp began taking bookings last summer, some 6,000 kids were enrolled on the first day—many of whom know their home state only through the piedmont or mountain regions in which they live.

“The camp really comes to life when kids come here,” says Chewning. “Some of these kids have never seen the ocean before. We have a boardwalk that goes all the way to the beach, and when they walk past the dunes and see it for the first time, you can see their eyes open wide. It’s special to share that moment.”

1955
The Negro Beach House pavilion opens on the south end of Jekyll Island, one of the few oceanfront destinations for blacks in the South.

1959
A group of black businessmen builds the Dolphin Club and Motor Hotel. It is subsequently purchased by the state and leased to Dave Jackson, a cattle farmer who hires his two sisters to manage it.

1961
Blues legend B.B. King performs in the lounge of the Dolphin Club.

1964
In response to a lawsuit filed by the NAACP, a court rules that all state-operated facilities on Jekyll must be integrated.

1966
The Dolphin Club and Motor Hotel closes. The Jekyll Island Authority subsequently operates the site as a youth center.

1983
The University of Georgia begins offering summer camps—and soon after, year-round environmental programs—for schoolchildren and youth groups from kindergarten through high school. Between 1987 and 2014, more than 279,000 kids visit the 4-H Center.

2014
The 4-H Center closes down, to be rebuilt by the Jekyll Island Authority from the ground up as Camp Jekyll.