Home
/
Magazine
/
How to Get Along with Gators

How to Get Along with Gators 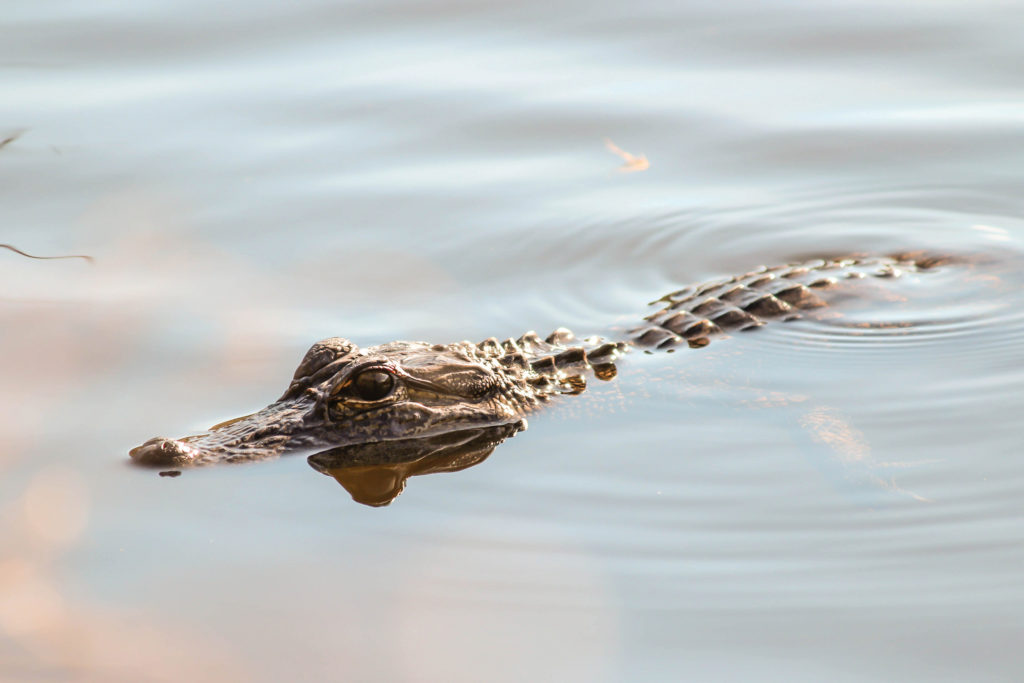 Alligators live in peaceful plenitude on Jekyll Island‚ and wildlife experts keep a closer tab on them than you might imagine. Still‚ some generous distance is good for everyone.

The scene at Horton Pond is eerily still. Even the insects are silent. Night herons roost like sentries in the trees‚ and on a platform in the water‚ a female alligator is holding an eyeball-to-eyeball staring contest with a turtle. The mood soon might be interrupted by a crunching sound as the gator devours the yellow-bellied slider‚ but for now‚ neither moves‚ prompting one visitor on the observation deck to wonder aloud‚ “Are these animals real or fake?”

Wildlife on Jekyll Island is decidedly real and unusually accessible‚ and its guardians urge visitors to adopt a policy of peaceful—and respectful—coexistence. “We don’t want people walking around in fear of alligators‚” says Ben Carswell‚ director of conservation for the Jekyll Island Authority. “At the same time we don’t want people harassing them‚ trying to catch them‚ or feeding them. Feeding them makes them unafraid of people and therefore all the more dangerous. We need to keep wildlife wild.”

Managing the relationship between gators and people is a critical mission for the Jekyll Island Authority’s wildlife team. While fatal alligator attacks are incredibly rare (there’s only been one ever in Georgia‚ in 2007), the potential for danger is always present—for both parties. “A fed gator is a dead gator‚” says wildlife manager Joseph Colbert. “If one becomes too aggressive we would have to put it down. We haven’t done that yet‚ but we keep it on the table as an option.”

The Jekyll Island Authority’s conservation department and Sea Turtle Center work to monitor the population and study the alligators’ movements‚ reproduction‚ and health. Initially‚ for five years‚ researchers surveyed thirty locations monthly with powerful spotlights that picked up the gators’ spooky red eye shine. As the project evolved, researchers mounted GPS tracking units on the animals, which collected valuable location data. They also notched their tails for identification purposes and took blood samples to gauge their health. The gators‚ who were not hurt during the process‚ were tracked for a year.

The GPS device collected location points every hour that could be downloaded remotely. “This revealed where we might have conflicts with people‚” says Gregory Skupien‚ who came to Jekyll as an AmeriCorps volunteer and stayed to write a master’s thesis on alligator conservation.

Their findings? An estimated 110 alligators four feet or longer now call Jekyll home‚ though they have been known to venture as far away as St. Simons and Brunswick. The tracking and identification marks enable wildlife professionals to see when an alligator shows up in an undesirable spot. “These are usually the unruly‚ energetic teenage gators who cause problems‚” says Carswell. For example‚ one might emerge onto a crowded beach‚ causing alarm. In that case‚ it is likely exhausted and trying to travel back to its preferred freshwater habitat; staffers can break out the treble hook and lend it a helping hand to get home. The system also reveals repeat offenders who are begging for food. About 18 percent of the calls to Jekyll’s wildlife hotline involve alligators‚ and half of those require a response from a park ranger or wildlife manager.

The GPS research ended in 2015‚ but the Jekyll conservation team continues to keep tabs on the animals through standard mark-and-recapture procedures. Though the population fluctuates‚ the gators tend to police themselves. “Large males and even siblings will take out other alligators‚ which keeps the population from exploding‚” says Colbert. “They don’t have predators to keep their populations in balance‚ and they won’t just allow thousands to grow up to compete with them‚ so they regulate themselves by being territorial and essentially fighting for space to survive.”

To look at one of these animals—Alligator mississippiensis—is to gaze deep into the primordial past. Gators have not evolved much since their ancestors emerged during the Cretaceous period 65 million years ago. The name “alligator” is believed to be an anglicized version of “el lagarto‚” or “the lizard” in Spanish‚ the language of early explorers and settlers in Florida.

Alligators are most active during mating season in the spring. “Around here‚ you can hear the males bellow‚” Carswell says. “It’s this low-volume rumble that’s almost ultrasonic‚ vibrating on the surface of the water. Nesting season in July is an especially sensitive time when you take extra caution around alligators. Experts recommend giving them a berth of at least fifteen feet because the female is guarding a clutch of twenty-five to fifty eggs that are vulnerable to raccoons and possums. In fact‚ about a third of their nests end up destroyed by predators. During colder months‚ alligators burrow into berms to rest and conserve their energy. “They’re ectothermic‚ meaning they take heat from their surroundings‚” explains Jekyll park ranger Ray Emerson.

These are the type of facts visitors learn at Gatorology 101, an hourlong educational program through the Jekyll Island Authority’s conservation department. “During this hands-on experience‚ you will learn about the American alligator’s biology‚ behavior‚ history‚ and conservation while we demystify common misconceptions about these amazing reptiles‚” Emerson says. “We communicate the important message of: Don’t feed. Don’t approach. Don’t touch.”

Well, normally don’t touch. That rule does not apply to the center’s animal ambassadors. Jekyll has a special educational permit to house and show off alligators that have been raised in captivity. At the end of Gatorology‚ young Timmy‚ born at Orlando’s Gatorland zoo in 2016 and currently measuring about eighteen inches long‚ will pose with you and possibly smile for a selfie.

Jekyll’s wildlife experts know the importance of showing the softer side of these armored reptiles—of sharing‚ for example‚ that they are nurturing mothers who stay with their young for up to three years. Habitat destruction threatens all wildlife but especially gators. Because of their size—the largest Jekyll gator found so far was eleven feet nine inches and weighed 600 pounds—they require more space to roam. They are often the first species lost when people and businesses move into their territory‚ causing a ripple effect down the food chain. As an apex predator‚ gators provide necessary checks and balances to populations of deer‚ raccoons‚ and foxes along with crabs‚ turtles‚ and terrapins. “We want visitors and residents to safely enjoy and learn from these amazing creatures for generations to come‚” Carswell says.

Alligators are vital to the ecosystem‚ but they are inherently wild. A few extra precautions can keep you safe. On Jekyll‚ always control your pets and use a leash. “A dog is like ringing a dinner bell‚” Colbert says. Adds Carswell‚ “One of the good things about Jekyll is that almost no houses are next to ponds‚ so we don’t have too many pet issues.”

Golfers‚ take a mulligan rather than loiter around the edge of the water; alligators treat Jekyll’s twenty-four golf course ponds as their personal lounges. Don’t be suckered in by tiny hatchlings—their protective mother is lurking nearby. And please keep your candy to yourself. “People are infatuated with feeding the gators marshmallows because they float on top of the water‚ or Skittles‚ but if we see that‚ we might get the Georgia State Patrol involved to shut it down‚” Colbert says with an emphatic nod. Feeding any wildlife is prohibited on Jekyll Island.

The best place to view alligators safely is Horton Pond‚ which furnishes them with their own sunbathing deck at a safe distance from people. “I’ve seen as many as three at a time congregated there‚” says Emerson.

Animal lovers should keep an eye out for Striker‚ Jekyll’s clever‚ gigantic celebrity gator. All of the locals have a story about Striker‚ who hangs out at the south end of the island and—according to legend—obeys the crosswalk signs at the roundabout. Like a tough guy at a bar‚ he has a big‚ noticeable scar from a boating accident. Presumably the boat got the worse end of that collision. The bacteria in pond scum helped his wound heal‚ so he keeps on trucking.

“Our mission is to preserve‚ promote‚ and educate about the rich diversity of species here‚“ says Emerson. “If we can get one person to respect and enjoy alligators properly‚ we’ve done our job.” 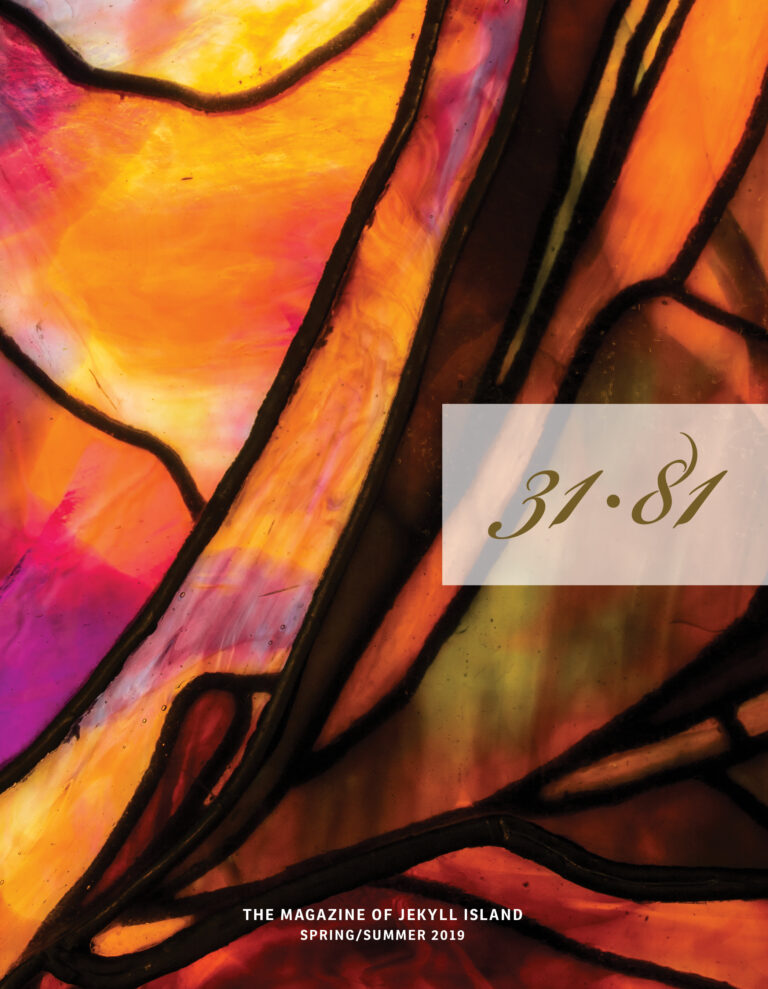 This article first appeared in Volume 3 Number 2 of 31•81, the Magazine of Jekyll Island.