Care for the Canopy 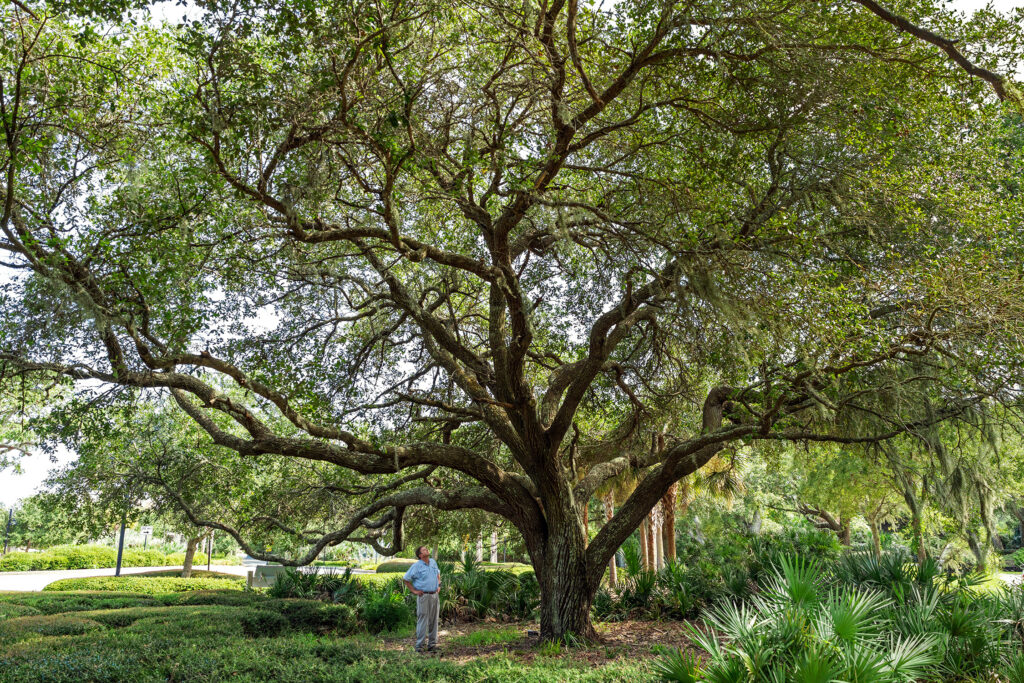 Jekyll Island’s magnificent trees, most notably the grand live oaks that line roadways and make up a good part of the native canopy, are a well-known and much-loved element of the look and feel of the island. The beauties filter the air, provide welcome shade, furnish needed habitat for the area’s pollinators, and supply a year-round elegance that is a part of the very definition of the island.

What visitors and residents may not be aware of, though, is the great lengths that are taken to maintain and preserve these natural wonders.

Cliff Gawron, the director of landscape and planning for the Jekyll Island Authority, and his team are charged with keeping the island looking beautiful and natural. When it comes to the trees of Jekyll, “Our primary focus is to preserve the overall native canopy which Jekyll is known for,” Gawron says. “We try very hard not to have a net loss of live oaks on the island and our Tree Protection Ordinance affords the highest level of protection to our healthy live oaks. Other native trees are also afforded a level of protection as well.” Those include red cedar, cabbage palms, bald cypress, bay magnolias, pond cypress, slash pines, and longleaf pines.

The trees on Jekyll face numerous challenges unique to the maritime forest of Georgia’s barrier islands: exposure to salt water and fresh water, varying tides that lead to flooding followed by drought, and extreme temperatures.

But, according to Gawron, “the greatest challenges trees face on Jekyll include residential and commercial development pressures such as increased density on developed parcels and the impacts of humans; mainly compaction to tree roots and the addition of active use areas in such close proximity to the trees.”

By law, only 1,659.4 acres are designated for development on Jekyll Island, which helps Gawron and his team minimize the collateral impact to the island’s trees. “Most of these impacts by themselves are minor,” he says, “but when they occur cumulatively over time, they can have a significant impact on the overall health of a tree.”

Once in a while, Gawron and his team have to transplant large mature trees to keep them healthy and thriving. One of the primary challenges when digging and moving established trees is having sufficient room to execute the work. It’s especially tricky when large equipment to dig out and move the root ball is necessary.

The work also requires a long-term commitment to the aftercare of the transplanted trees. Depending on where the tree is moved, Gawron’s team uses either installed irrigation (not available in most locations) or a water truck (which can be both labor- and time-intensive) to keep the trees healthy.

Under ideal circumstances, Gawron and his crew root-prune trees a year before they’re scheduled to be moved. They use a sharp spade to slice through roots, cutting them from 9 inches to a foot away from the base of the trunk for every inch in diameter of the tree. This encourages new feeder roots to grow so that when the tree is transplanted the fresh roots help the tree to acclimate more quickly to its new home.

In reality, sometimes Gawron’s team simply doesn’t have the luxury to plan ahead. During the revitalization of the Beach Village and Convention Center in the fall of 2010, some 40 mature, live oaks had to be transplanted. The project began in September and was complete by Thanksgiving.

“The largest live oak we moved was a 37-inch dbh [diameter at breast height] tree. Of all the 40 trees that we moved, we only lost two,” Gawron says. “Drip irrigation was installed for all of the trees that were moved. They were carefully monitored for the first two years and then periodically for the following three years after being transplanted.”

And most recently, Gawron and his team replaced a dead Club-era cyprus tree with a young cyprus that was relocated from outside of Villa Ospo (pictured left). This new cyprus was carefully selected to ensure it could survive being transplanted and would match the aesthetic framing of the entrance to Crane Cottage.

In reforestation efforts on Jekyll, workers typically plant 4-inch diameter trees. They try to plant in cooler months, generally from the middle of October until late April, before trees bud and new growth starts for the next growing season. This reduces the stress put on the trees and allows them to focus their energy on establishing new roots.

“When we’re planting in areas that are considered undeveloped, we focus exclusively on planting natives,” Gawron says. In developed areas, non-natives are used as accents and to add seasonal color with plants like crape myrtles, loquat trees, Sylvester date palms, Italian cypress, and Arizona cypress. Even in developed areas, 70-75% of new plants on the island are native.

Gawron has come to the conclusion, over the years, that certain exotic trees should not be planted because of their weedy nature. The Pindo palm (Butia capitata) is known as the jelly palm for its edible gelatinous yellow fruits. The fruits spread easily and quickly and are a threat to the dunes and marsh. Another aggressive species to avoid—one that will crowd out natives—is the Camphor tree (Cin­namomum camphora). The seed is spread far and wide by birds. When it comes to invasive plants, the Chinese tallow (Triadica sebifera) is the most aggressive species. Gawron con­siders it Public Enemy No. 1 when it comes to invasive exotics on Jekyll Island.

The biggest threat to local trees, though, is not hungry developers, rowdy visitors, or runaway plants. “If the island were ever to be directly hit by a major hurricane,” Gawron says, “the impacts would be overwhelming to most of the mature trees on the island.”

When trees die or are damaged, Gawron and his team work with other tree-loving types to sustain a thriving maritime forest and natural green space around the island.

“In addition to annual appropriations from the JIA general budget, the Jekyll Island Authority works closely with several organizations—Georgia Forestry, Garden Clubs of Georgia, and the Jekyll Island Foundation through grants and donor gifts to further invest in reforestation of the island,” he says. The JIA also invests fines from strict tree-ordinance violations back into planting expenses.

In 2017, the JIA began a new program to grow live oak and pine seedlings from existing trees. Since then, more than 1,230 new trees have been planted, and there are plans to plant another 100 mature ones by the end of June 2022.

Despite the challenges, and because of the work of many, Jekyll Island’s stately canopy continues to thrive. Most impressively, it remains an enduring symbol of the place; beautiful and strong, a successful partnership of man and nature.