In 1886, Jekyll Island was purchased to become an exclusive winter retreat, known as the Jekyll Island Club. It soon became recognized as “the richest, most inaccessible club in the world.” Club members included such notable figures as J.P. Morgan, Joseph Pulitzer, William K. Vanderbilt, and Marshall Field.

Members prized the island for its “sense of splendid isolation,” beautiful landscape, and moderate climate. Jekyll Island, with its cottage colony and clubhouse, was viewed as a little paradise, where members and guests pursued “a life of elegant leisure.” 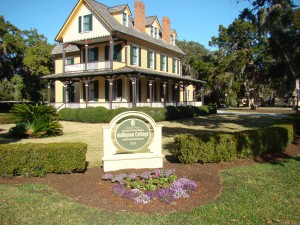 Built in 1884 by John Eugene DuBignon, this home was originally located on the site of Sans Souci, but was moved to its present location in 1896 in preparation for the construction of Sans Souci. Mules pulled the house with the help of skids and logs. The structure was lowered on to brick piers, lattice was added under the porch and the exterior color scheme was altered to make the porch posts and window trim considerably darker. Decorative brackets and gutters were also added. It is likely that the Club added numerous enhancements, including the addition of faux marble to the fireplaces and decorative scoring on the hallway and parlor floors. 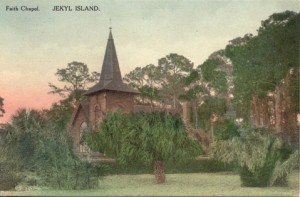 Prior to Faith Chapel’s construction in 1904, Club members attended services in the tiny Union Chapel, which was originally located in the north end of the Club compound near the Gould Tennis Court. Between 1898 and 1904 Charlotte Maurice had arranged for visiting clergymen, and had welcomed clergy of several different denominations. This inclusiveness continued in the new chapel, with Episcopalian, Presbyterian, and other denomination.

After funds were raised to construct Faith Chapel, Union Chapel was moved to the area known as “Red Row” that contained the homes of African-American employees.

The furnishings in Faith Chapel complement the Gothic Revival architecture, with their simple forms and trefoil cutouts recalling the technique of Medieval craftsman and the decoration of European Gothic cathedrals. 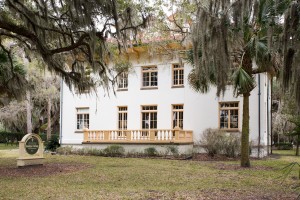 Architects John Carrere and Thomas Hastings of New York City designed this white stucco winter home, typical of Mediterranean Revival architecture. Their firm also designed the New York Public Library and the Ponce de Leon Hotel in St. Augustine, Florida. The cottage was built in 1906 for the lumber baron, Frank Henry Goodyear of Buffalo, New York. There are seven rooms and a half-bath on the first floor and five bedrooms and three baths on the second floor. The third floor originally contained a servant’s room, a bath, and a storage area. The house was restored in 1974 and is now used as a center for the creative arts, housing the Jekyll Island Arts Association and the Jekyll Island Pottery Guild. Exhibits by both local and visiting artists are on display monthly.

Hollybourne Cottage was built in 1890 by Club member Charles Stewart Maurice. Maurice helped to construct many road and railway bridges across the country. By the time Maurice retired in 1895, he had helped traverse many of the nation’s major waterways and had been instrumental in the construction of major landmarks around the country.

Hollybourne Cottage is one of Maurice’s many unique creations. The fabulous vacation retreat that Maurice built on Jekyll Island in 1890 was designed to be an architectural wonder of its own. The style was called Jacobethan or pseudo-Jacobean and was an early example of an eclectic Tudor style popular from 1890 until 1940. The home features Flemish gables, paired chimney flues, and patterned stonework. It is the only home built during the Club era with tabby. The home was constructed with a steel support system, solid base of 19 brick piers in the basement, and a system of trusses to help distribute the weight and support the living and dining room ceilings without the use of beams.

In its original condition, the vacation retreat was a much-loved haven for Mr. and Mrs. Maurice and their nine children. The Maurice family made an annual pilgrimage to Jekyll Island, where they enjoyed a whirlwind of entertainments and explored the island’s simple pleasures.

Today, however, the cottage remains a diamond in the rough, with ongoing efforts to preserve the structure. 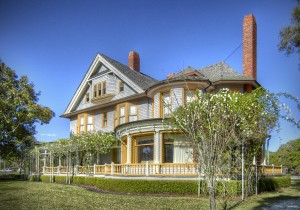 By the time the house was completed, six private cottages were listed on the Glynn County tax rolls for Jekyll Island. Included on the rolls were cottages built by McKay, Brown, Fairbanks, Maurice, Baker, and Furness. In addition, the main Clubhouse and several service buildings were extant.

Originally, McKay’s home looked very different, inside and outside, than it does today. It had only one public room, the parlor to the right of the front door. The remaining rooms were bedrooms, each with its own bath, which is why there is now the unusual feature of a bathroom opening onto the Reception Room. William Rockefeller made extensive changes to the house between 1912 and 1917:

Rockefeller’s finished cottage included eight family rooms plus six servant/service rooms on the two main floors, in addition to servants’ rooms on the third floor. Rockefeller was also responsible for building the sea wall in front of his house in 1916. 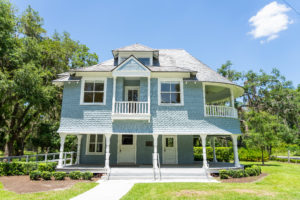 This charming historic cottage was built in 1890 for Walter Furness, the youngest founding member of the Jekyll Island Club. Research has revealed that the shingle-style Queen Anne structure was likely painted a light grayish-blue after being moved to its current location for use as an Infirmary in 1930. Returning to this Club Era color will result in a dramatic change to the appearance of the cottage.

The Infirmary is now available for lease. For more information, visit jekyllisland.com/infirmary.

Architect Charles Alling Gifford designed Mistletoe Cottage. He worked with the architectural firm of McKim, Mead, and White in New York City before opening his own firm there. The firm was the primary developer of the Colonial Revival and Shingle styles of architecture in the United States.

Gifford was best known as a designer of resort hotels, including Mount Washington Hotel in Bretton Woods, New Hampshire (which was owned by Club member, Joseph Stickney) and Clifton Hall in Niagara Falls, New York. He also designed the New Jersey State buildings for the World’s Colombian Exposition in Chicago in 1893, and the Louisiana Purchase Exposition in St. Louis in 1904.

Between 1896 and 1900, Charles Gifford was commissioned to design five buildings for the Club and its members. Gifford also designed the Glynn County Courthouse in a Beaux-Arts style, which is quite different than the styles he utilized here on the island. 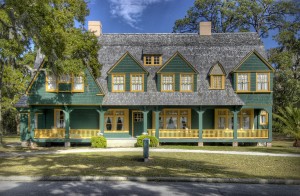 This cottage was built in 1896, as shown by the inscription in seashells on the front. Typical of the early club cottages, its rustic appearance is a reflection of the casual lifestyle of the original club members, who sought to escape from the pressures of the city to hunt, fish, and enjoy the natural beauty of the coastal environment. Downstairs are an entrance hall, a game room with wood shingle walls, a parlor, a dining room and servant’s area with butler’s pantry and kitchen. Upstairs are five family bedrooms, two full baths, one-half bath, and a servant’s room. The attic floor contains seven rooms, probably used as servants’ quarters, storage, and one bathroom. The cottage, like many built during the Club Era, also has a basement. Originally, a solarium was located on the south side of the cottage. 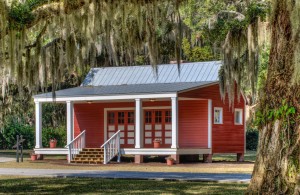 The Skeet House was originally built in the 1930s for recreational use by the Jekyll Island Club. Skeet shooting was a popular activity at the island resort, which first formed in 1886 as a hunting club. Thanks to recent fundraising assistance by the Jekyll Island Foundation, the building recently became the focus of preservation efforts by the Jekyll Island Museum. It was taken apart piece by piece and reassembled in its current location along Pier Road. In its new home in the heart of the historic district, the Skeet House now provides a centralized activity space for educational programs and entertainment within the historic district. 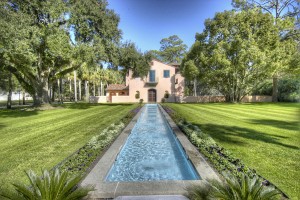 Villa Marianna was constructed in 1928 for Club member Frank Miller Gould, a second-generation member. Architect Mogens Tvede used a blend of Spanish Eclectic and Italian Renaissance in the style of this cottage. 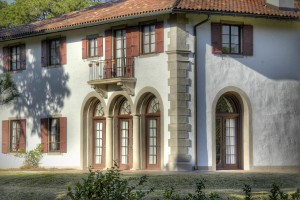 Villa Ospo was designed in 1927 for Walter Jennings. Jennings had joined the Club in 1926, and quickly rose to a leadership role, assuming Presidency after the death of Walter James (his brother in-law).

Jennings contracted with John Russell Pope in 1927 to design his Jekyll retreat. Pope has been considered one of America’s finest classical architects, whose important works included the Jefferson Memorial, the National Gallery of Art, Constitution Hall, the National Archives, the Temple of the Scottish Rite in Washington, D.C., mansions for William K. Vanderbilt and Marshall Field, and campus plans for Yale and Johns Hopkins Universities. Villa Ospo is a slight departure from Pope’s typical classical form but does hint at elements of classicism bleeding through. Typical of Pope’s work, most of Villa Ospo was probably designed by members of his firm after initial discussions between Pope and his client (Jennings). Pope would leave the details to his staff, and then add final touches to the final product before presenting the plans.