Top predators require more food and space than the animals lower on the food chain. Because of this, predators are generally the first species lost from developed areas. Due to their sensitivity, we carefully select and closely monitor priority species of predators on Jekyll Island. Jekyll is approximately 1/3 developed, which has the potential, without careful stewardship, to place some stress on these animals. We believe a strong understanding of predators on Jekyll Island is essential to ensure their continued presence and a healthy balance of predator and prey. We aim to be a model community that sustains a healthy coexistence with our native predators, so that visitors and residents can safely enjoy, and learn-from, these magnificent creatures for generations to come. 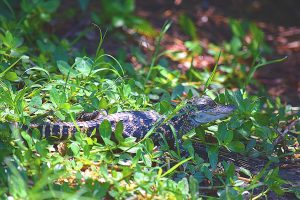 American alligators are an important top predator found in coastal ecosystems and are capable of taking large prey. Because of their size, power, and the rare but sometimes tragic attacks on people that have occurred in other places, they are a high-priority species for us to understand and manage. Along with fellow JIA staff at the Georgia Sea Turtle Center, we partner with the UGA Odum School of Ecology to monitor the approximate size of the population, and study their movements, reproduction, and health.

It is especially important for us to mark Alligators around the island, because they sometimes show up in unwanted places. For example, when an alligator emerges on a busy beach we can look at our data to assess where it may have come from or make an educated guess as to where it is headed, and move it to that area. Likewise, marking them allows us to know if an individual gator returns to inappropriate places or exhibits undesirable behaviors regularly. Begging is the most common undesirable alligator behavior that we observe and is a result of feeding by people. This can cause fear for folks that are unaware the alligator is begging, and believe they are being approached or stalked. An alligator that has been fed loses its fear of people and an alligator without fear of people can be very dangerous. We can discourage begging by capturing and marking these alligators, or recapturing them which allows us to know when we are dealing with a repeat offender, but the only way to prevent begging is to not feed alligators. Feeding wildlife is illegal, and if you see anyone feeding alligators, you are encouraged to report it to the JIA Conservation Department (Wildlife Cell Phone: 912-222-5992) or Georgia State Patrol. 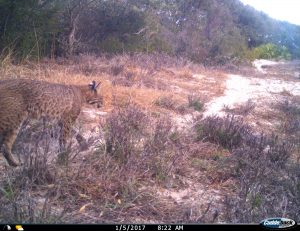 In 2014, through our early detection network, the first-ever documented occurrence of a bobcat on Jekyll Island was discovered when its image was captured on one of our cameras. Since that time, we continue to collect images and videos from around the island of the bobcat we initially dubbed “Boris”, followed by a female named “Natasha”, then finally in 2016 two kittens named “Rocky and Bullwinkle”. We continue to study bobcat movement patterns through tracks, and cameras placed around the island. We are additionally collecting DNA samples to better understand their abundance, distribution, and familial relationships around the island through genetic testing. Recently in October of 2017, we received a report of a sick bobcat. The conservation team was able to capture the bobcat, and seek treatment for it in partnership with the Georgia Sea Turtle Center and the Jacksonville Zoo. We were able to determine that the bobcat was Bullwinkle, one of the former kittens discovered through our early detection network. After the bobcat made a speedy recovery, we placed our first GPS collar on him. We now monitor Bullwinkle’s movement around the island, and in the future, we hope to collar the other Jekyll Island bobcats to develop a more comprehensive understanding of their spatial use, and establishment on a Georgia barrier island.

While bobcats are not rare in the southeast, the species is among the rarest native animals that reside on Jekyll Island. Cars and trucks pose serious danger to Bobcats as they move about on Jekyll Island. To help protect them and all our wildlife, please obey our speed limits and always drive with care and awareness. 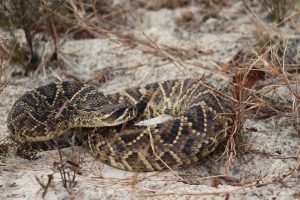 While death from snake bite is extremely rare, injuries can be severe. Do not approach, attempt to handle or kill a venomous snake. The vast majority of snake bites in the United States occur as a result of handling or attempting to kill venomous snakes. Additionally, wildlife on Jekyll Island State Park are protected, so If you observe someone attempting to handle or kill one, please call us immediately (Wildlife Cell Phone: 912-222-5992) or call Georgia State Patrol.